Keffren
I am organizing the DRAEC (D'ni Research, Ages, and Exploration Committee), you can find me in Sharper's office most of my off time.

DRAEC Productions is proud to present…

Cavern Watch! Cavern Watch is a show about the cavern, and all current events that AREN’T involved with the DRAEC. Our first episode aired yesterday. 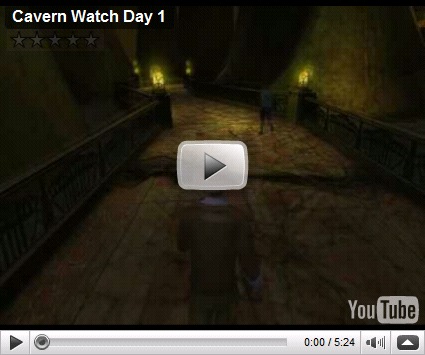 Ah, sweet serenade of Relient K in the background. Wait, there isn’t any foreground sounds. Oh well! The Fun Run doesn’t have a set date yet, but I assure you, it will be coming soon! I thank the organizers of the Fun Run for helping me get this video running!

I took another trip to Teledahn yesterday. Amazingly, I only go down there every other day.  I take a few pictures, get them developed on the surface, (OOC: Exchange them into a usable file form) and go into D’ni to write a report. That’s about it. I plan to try and find out about the inner workings of Ahnonay as a back project as well, but I have to get someone to help me finish the age… I’m having a tough time figuring out what some broken mechanisms in Teledahn were used for, because it seems unusable, even in a good state of repair. Sadly, I don’t have the equipment or the skills to get up to the broken item, so I will have to rely on my own KI photos and some surface technology to see it’s workings.

Here’s some new photos I took for my report on Teledahn’s walkways:

You’ll have to come to my meetings to find out the importance of these photos! When I visited Teledahn for the first time in years, my mouth fell open. I forgot the wonderful age’s beauty, I forgot how amazing the world is where Shroomie lives, and how amazing Shroomie is in general! The flappers kept on flapping, and the bird things, of which the names escape me, kept on flying. It bothers me how annoying it will be to snap a photo of those flying buggers. At least there is a method to getting Shroomie to come close. I tried to get the old girl up close and personal last week, but with no avail. this is the best I could manage.

I truly, truly love Teledahn, I could never enjoy the D’ni or Bahro more without it.

I also have more information on who will be attending the meetings this weekend! I have news the the Guild of Messengers will have a few people in attendance, as well as a probable appearance by the CCN. I think I will be filming the meeting for YouTube, so that is good news for people in odd time zones (Hawaii? Australia?)

I have heard of an idea for a D’ni based University, and I like the idea. I hope I can make the meeting, so I can get an opportunity to teach current D’ni sciences! Phew, that’s a long entry… Hopefully I’ll see you in my meetings!

Sorry for taking up uber amount of space on URUBlogs!

Posted by Keffren at 5:47 AM No comments:

Well, as the president of the DRAEC, I’ve decided we needed a website. It’s a free site, so it’s nothing special, but it does the job well. Why don’t you check it out? Oh wait… you’re just a journal… http://draec.webs.com

Anyway, I’m making 2 appearances to speak to the public next week, and yes, they will be the same talk. I will be in Ae’gura on the 27th by the DRC Tent at 8:00 EST and then on the 28th I’ll be at the Guild of Greeters Bevin at 10:00 AM EST.  I hope people can make it! I think I’ll be getting some new people interested, and getting some questions. I will most likely be doing the speech over voice chat, so get your speakers ready.

I worked on my report on Teledahn’s slave cages, but I still have to investigate underneath the ground. It will most likely take a long time because of the hard ground in the area.

DRAEC Details (and Other Information)

Disclaimer: The DRAEC has no feelings, good or bad, toward the DRC.

The DRAEC has a several stage progress of an age, like the DRC did. The stages are set, to understand the history, safety, and technology of an age. Once an age is completely approved, the full report is released. The stages run as follows:

Stage One:  Solve each puzzle, explain the inner working of the puzzles, and explain the source of power. Also known as the Tech Stage.

Stage Two: Name all unnamed organic materials in the age, explore the age’s atmosphere, and astronomy. Write a singular report on the age’s wildlife. Also known as the Habitat Stage.

Stage Three: Compare samples of the age’s materials and show any results. Also known as the Material Stage.

Stage Four: Explain the meaning of any glyphs and decipher any documents. Explain the use and reason for creation of the age. Also known as the History Stage.

Stage Five: Note all safety issues, and write a guide on how to avoid them. We are not out to limit access to any age. Also known as the Safety Stage.

Reports Required to Pass Each Stage

Who’s in it? DRAEC Positions

That’s all the positions in DRAEC Prime :)

I have been working on Teledahn, and because of it’s wonderful and mysterious source of power I decided to do that first. I finished my first report, and there are many more to come. I also plan to make a website for the DRAEC, because it will house all of our reports (in picture form, sorry I can’t get my journal entries onto text.) Oh yeah, I got my KI number, I forgot to mention it last time. 152911 Yeah, 911, ha-ha! This is mainly a report for DRAEC members, and hopefully, future members! Please contact me if you are interested!

Posted by Keffren at 4:24 PM No comments:

I finally made it into the cavern! I can’t talk much, because I’m heading back down to spread the word of the DRAEC (D’ni Research of Ages and Exploration Committee) I am seeing things I’ve never seen before, and it’s just amazing. I will be giving a speech about the DRAEC in a few days… I will spread the word on the forums and I’ll see who I can convert to help research!

DRAEC is to be Formed

Today, I packed to head down to the cavern. I’ve never been there, but I’ve been almost everywhere else  in the D’ni ages. I have contacted few about the possible formation of the DRAEC. I disagree with the views of the DRC, and I believe that my committee is needed to just research the ages and explore the history of the D’ni without touching or changing anything. Of course we could touch things, such as taking samples, yet the DRC will move, let clumsy tourists in, or even colonize these historic ages. The DRC is needed though, I’m not saying it isn’t. They need to open up ages, let honest explorers in, and hopefully work with the DRAEC. I can’t stress enough, I’m not against the DRC, I just don’t agree with everything they do. If I get some interest, then a site is in need to be made. I will assign ages for people to explore and take samples. Here are my primary goals, age specific:

Teledahn: I will research this age myself, seeing what exactly the giant mushrooms are made of and how the D’ni technology there works.

Gahreesen: I hope I spelled this age correctly! I want someone to take rock samples and compare them with other buildings in the cavern. I also want them to examine those doors, and see how they work.

I would like people to message me in some way if you would like to join the DRAEC. I will make a post when I make a trip down to the cavern and retrieve my KI, to give the masses my information.